Faith Community Not Giving Up Fight 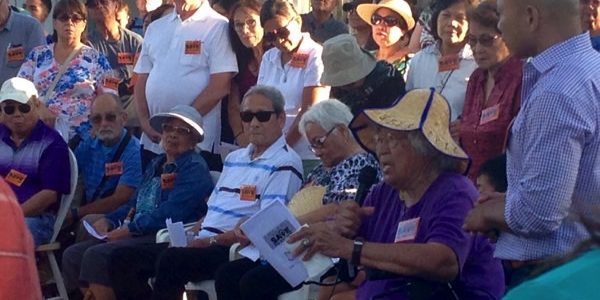 SAN DIEGO – On the evening of July 5, faith leaders from San Diego Organizing Project (SDOP) urged the Rancho Peñasquitos Planning Board to protect the last remaining affordable housing in the neighborhood. After public input, the local board voted to disregard the community and approve a private development that would displace hundreds of families.

“It truly makes you question the values of the men and women hired to guide our community toward a better quality of life. Do they have their own best interest at heart, or the best interest of our local families?” said 93-year-old Felicita Cayabiab, Peñasquitos Village resident and SDOP leader. “If the development is approved, I don’t know where we’ll go.”

The July 5 vote follows last week’s public processional and service, where hundreds of community members demonstrated the need for affordable housing with a march, prayer, songs and heartfelt personal testimonies.

The City of San Diego originally zoned areas of Rancho Peñasquitos for affordable housing in 2006. Now, private developers are seeking approval to ignore this pre-established zoning and demolish 332 affordable units where families currently live. Peñasquitos Village is the only affordable housing in the area, with an average rent of $1,370 for a two-bedroom unit. Developers want to replace the complex with luxury apartments and homes that are unaffordable for low-income residents.

Faith leaders say the development proposal threatens a community already struggling with a massive housing crisis. San Diego County has a shortage of 142,000 affordable units for families currently paying more than 30 percent of their income on rent. Since 2000, median rents in San Diego have increased 36 percent, while renter household incomes have only risen by four percent.

According to SDOP, the fight for affordable housing in Rancho Peñasquitos is far from over. The project now requires approval from the San Diego Planning Commission, which will vote in late summer. SDOP leaders hope to stop the development before it moves to City Council for a final vote.