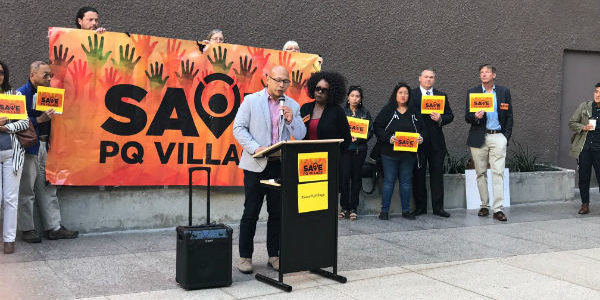 The City of San Diego originally zoned areas of Rancho Peñasquitos for affordable housing in 2006. Now, private developers seek approval to ignore this established zoning and demolish 332 affordable units where families currently live. Developers hope to replace the complex with luxury apartments, condos and townhomes that are unaffordable for low-income residents.

San Diego has the fourth largest homeless population in the nation, with more than 9,000 people experiencing homelessness on any given night across the county. Since 2000, median rents in San Diego have increased 36 percent, while renter household incomes have only risen by four percent. Peñasquitos Village, the only affordable housing in the area, has an average rent of $1,370 for a two-bedroom unit.

“Many of my neighbors could be on a waiting list for years to qualify for another Section 8 development,” said Sarah Marealle, Peñasquitos Village resident and SDOP leader. “I’m one of the few who has found alternative housing, and I will have to walk an extra mile to access public transportation every time I go to work.”

Leaders with the San Diego Organizing Project say they will continue to fight to protect affordable housing in Rancho Peñasquitos. In early 2018, City Council will give a final vote on the project.