The Myth That ‘Everybody Wins’ 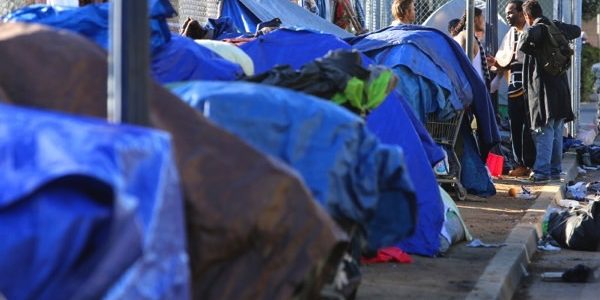 Last month, Father John Authur of Our Lady of Guadalupe Catholic Church wrote an opinion piece in Voice of San Diego, explaining why the people who live on our streets deserve as much investment as those who prosper from tourism and conventions. Check it out here.

I go for a walk almost every morning. Just a block from our church, under the Commercial Avenue freeway overpass, I have to move to the middle of the street because the sidewalks are clogged with tents. The smell of human waste chokes the area.

Then, I head up 16th Street, where families are just waking up. Kids with their sleepy, messed-up hair tumble out of tents and veterans whose vouchers are useless in an overpriced, scarce rental market wander down the street. They rub shoulders with the whole range of mentally ill, addicted, alcoholic and recently evicted brothers and sisters who all start their day trying to organize their little sidewalk space.

In this short walk, I pass hundreds of the thousands who are forced to call the streets of San Diego home. It wasn’t always this way; it was much different when I came to Barrio Logan almost 20 years ago.

“Invest in conventions and tourism,” some of our city leaders are telling us. “Everybody wins.”

That’s not true. Study after study has shown that as you replace affordable homes in low-income communities with restaurants, hotels, a ballpark, parking and places for tourists and convention-goers to stay and spend their dollars, you displace people who live in those neighborhoods. In the areas adjacent to these new developments, you drive up the price of renting and draw down the stock of housing. In other words, in a short 20 years or so, you create a homeless crisis. Now, thousands of people are forced into the street and families must double or triple up in small apartments.

Mayor Kevin Faulconer’s latest attempt to help the thousands of people experiencing homelessness is yet another failure to recognize this basic economic reality. He proposes increasing the hotel tax, and two-thirds of the money generated from the tax hike would go toward expanding the San Diego Convention Center. The other third would be split between homeless services and street repairs.

That means less than 18 percent of the money raised from the additional tax would provide services to address the housing crisis and get people off the streets. The positive effect of that 18 percent will be overwhelmed by the damage that the growth of conventions and tourism will inflict on housing stock and housing prices.

Already in these few years, 10,000 units of inexpensive housing disappeared under redevelopment. Is it any wonder that 9,000 people are homeless in the county and thousands of families live cramped together because a single family cannot afford the rent? Redevelopment that will occur with the mayor’s plan will follow the gentrification and displacement that we have seen in the last 20 years.

It’s no coincidence that special elections have a much lower turnout than general elections. With only a fraction of San Diego residents voting on the issue, it may be easier for wealthy stakeholders and insiders to make their voices heard, compared with low-income communities that already tend to experience lower turnout. And this plan, being pushed forth in a hurried fashion, is weak on a comprehensive vision for addressing homelessness.

Compare San Diego with Los Angeles on this issue: Last November, Los Angeles residents supported a measure to fund 10,000 new units of housing for homeless residents. Just this March, another Los Angeles measure increased the countywide sales tax to raise $3.5 billion for homeless services over the next 10 years. That city gets it: If you are going to support a tourist capital, you must mitigate the effects with substantial investment in affordable housing and homeless services.

To bring this kind of vision to San Diego, Faulconer’s proposal should be replaced with a new tax that exclusively supports affordable housing and homeless services. A coalition of labor unions, environmentalists and community organizing groups already has a measure in the works, and it seems promising. A new poll shows San Diegans are far more likely to approve a hotel tax hike focused exclusively on solving homelessness than Faulconer’s plan anyway.

The people who live on our streets deserve as much investment as those who prosper from tourism and conventions. Then, everyone will truly win.

I hope that in the 2018 general election, we can go into the voting booth with an opportunity to make a vision of love and dignity a reality for all families in San Diego.

Read the full piece here from Voice of San Diego.