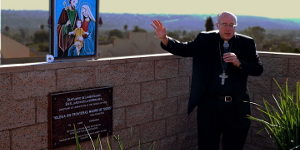 On Sunday afternoon, September 20th, SDOP welcomed recently appointed Bishop of the Roman Catholic Diocese of San Diego Robert McElroy to Our Lady of Mount Carmel Church in San Ysidro where he led SDOP’s Church of the Border gathering. The event occurred at the start of the week in which Pope Francis I began his apostolic journey to the Americas. SDOP as an affiliated federation of the PICO National Network is observing the Pope’s visit at the start of PICO’s “40 Days of Faithful Action” during which all people of faith are invited to join in a re-awakening of the nation’s moral consciousness, and join in the pontiff’s message of inclusion and liberation for all of God’s children. Bishop McElroy was appointed by Pope Francis last spring. He was joined at the event by Bishop James Mathes of San Diego’s Episcopal Diocese, Bishop George Dallas McKinney of St. Stephen’s Cathedral Church of God in Christ, Reverend Kathleen Owens of First Unitarian Universalist Church in San Diego, and other area faith leaders to lift comprehensive immigration reform as a moral issue for which the church must raise its collective voice.

Bishop McElroy said that immigration will be a concern raised while Pope Francis is in the U.S. “We are a nation of immigrants. First and foremost. That is our identity. And yet that identity is repudiated day after day in this nation, when we refuse to embrace the immigrants who have lived here for so long, seeking only to live good lives among us, to be Americans…the challenge of inclusion, is the very heart of the challenge that the Pope has given to the whole life of the church internally and externally,” Bishop McElroy said.

At the conclusion of the gathering, Bishop McElroy consecrated a newly created memorial wall at Our Lady of Mount Carmel that recognizes the significant impact upon families that enforcement of outdated policies and laws regarding immigration have had. The memorial is identified as a Sanctuary of Lamentation in the Garden of Hope. A plaque affixed to the monument quotes Pope Francis, “Iglesia sin Fronteras, Madre de Todos (Church without Borders, Mother of all.)” Nearby, those attending the gathering mounted symbolic crosses with the hand-written names were placed on an adjoining fence in honor of loved ones and acquaintances who have been separated from families in the U.S. due to deportation and other effects of immigration policy. Bishop McElroy told the audience that the wall will remain in place until borders no longer continue to separate family members from one another.