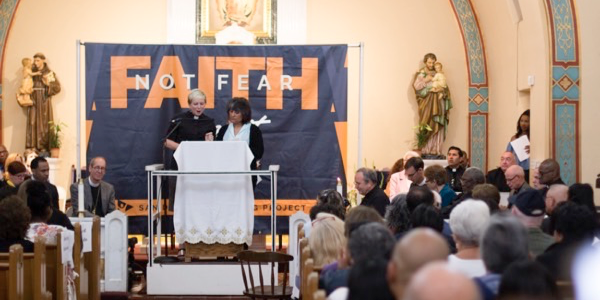 “I was in this country for many years without papers. I know how it feels — how many opportunities you let go by because you don’t have a good status.”

Gloria arrived in the US when she was 15 years old, and she understands all too well what it feels like to live in fear of deportation.

Now a legal resident with two children in college, Gloria has spent the last six years as an SDOP leader to keep families together and lift the voices of her fellow church members at Christ the King.

Gloria lives a powerful legacy of faith in action.

In 2013, she led 5,000 people in the March for Dignity and Respect and spoke in front of a crowd of thousands on the need for immigration reform in our border community.

Before President Obama extended the Deferred Action for Childhood Arrivals (DACA) program in 2015 to protect people who came to the US without documentation as children, Gloria saw her community being taken advantage of. People charged her neighbors thousands of dollars, claiming to secure their spot in line for a DACA extension.

In response, Gloria led an education initiative to inform the community of their rights, as well as programs at churches across San Diego. She spoke in front of hundreds of people at a 2016 conference to keep DACA recipients from being exploited.

Gloria has coordinated regular “know your rights” workshops for undocumented immigrants at Christ the King, and she launched a new program to help people at her church apply for citizenship.

In 2016 alone, 18 people in her community became citizens, registered and voted in the general election.

Will you join Gloria to choose #FaithNotFear?

Gloria does incredible work to keep families together and protect those in our community who live in fear. To learn more about her story, click here to see Gloria’s recent interview with Channel 50 or click here to hear why she chooses faith not fear.