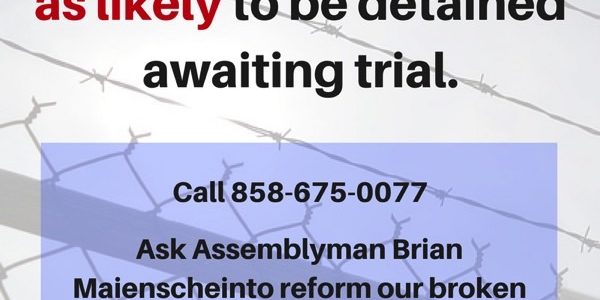 California’s bail system punishes the poor for being poor.

Too often in California, people who are arrested but not convicted of a crime spend weeks, months or even years locked in jail while awaiting the resolution of their case. Because most can’t afford bail, they can’t return home.

Rather than serving justice, our unfair bail system only perpetuates the mass incarceration of people in low-income communities of color. According to nation-wide studies, black and Latino people are more likely to receive higher bail amounts than white people, yet they are less likely to be able to afford it. California actually spends $4.5 million every day to incarcerate people awaiting trial, wasting tax dollars that could fund critical programs to build up our communities.

Overall, black and Latino people are twice as likely to be detained while awaiting trial as compared to white people. Our brothers and sisters should not be separated from their families, miss days or weeks of work or go into debt to pay bail when they aren’t yet convicted of a crime. In fact, one third of people arrested in California are found not guilty.

A new California bill would reform this broken bail system.

The California Money Bail Reform Act of 2017 (SB 10 and AB 42) will reform our bail system so that no one is kept in jail while awaiting trial simply because they cannot afford bail. It will also ensure that judges have the information they need to determine who can be released while they await trial and what the conditions of release should be.

This bill seeks to significantly reduce the use of money bail and to increase the number of people who are able to safely return home after arrest. It does this by:

1. Moving to a system where community safety, not wealth, is the basis for determining pretrial release

2. Building a system that looks beyond a person’s income or the color of their skin to determine whether they can return home while they await trial

3. Providing people with pretrial services to help them get back to court and comply with court-ordered conditions of release

Will you take action today?

Hello, my name is ________________ and I am a resident of San Diego, California. Too often, California’s current bail system wrongly imprisons people of color because they can’t afford bail.

I’m calling to urge (Assemblyman Maienschein/Assemblywoman Gonzalez) to support SB 10 and build a system that looks beyond a person’s income or the color of their skin to determine whether they can return home while they await trial. Thank you for supporting this important bill to keep our communities safe and keep our families together.