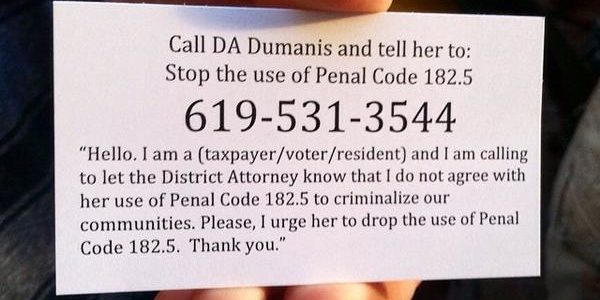 SDOP’s Racial Justice and Equity Team has been exceptionally active these past two weeks in anticipation of a Superior Court Hearing that took place Monday, March 16. The case of two men from the Lincoln Park neighborhood has raised an outcry among San Diegans and captured headlines across the nation. Their charges were dropped late this afternoon.

Aaron Harvey and Brandon Duncan faced charges of conspiracy for allegedly belonging to a gang that was implicated in several 2013 shootings. Under an obscure state penal code (section 182.5), Harvey and Duncan were charged with crimes of a gang as if they themselves are gang members – they are not – because of the relationships they have with friends and neighbors in their home community. Essentially, they faced potential life sentences in state prison for crimes they did not commit. They could be up against criminal charges again if the DA’s office decides to refile.

SDOP’s mobilization efforts have garnered a great deal of media coverage (see links below). Our mobilization culminated in a prayer vigil and march Sunday evening, March 15 in downtown San Diego. Hundreds of San Diegans came together to protest the DA’s prosecution and pray for justice for Harvey and Duncan.

Reporting and commentaries have called out the systematic racial profiling, overprosecution and overcriminalization of young men of color in American policing and the criminal justice system. Critics of the DA’s prosecution efforts say that the charges are unconstitutional. We at SDOP oppose the DA’s efforts to hold these men guilty by association and to criminalize them. We will continue to rally and speak out until justice is served.

For more details, see the compilation of the reporting and commentary that has been published so far:

Judge Tosses Charges against Harvey, Duncan – But it Might Not End There

DA’s Prosecution is an Injustice

Guilt by Association: Facebook Pics Could Help Send a Young Man to Prison for Life