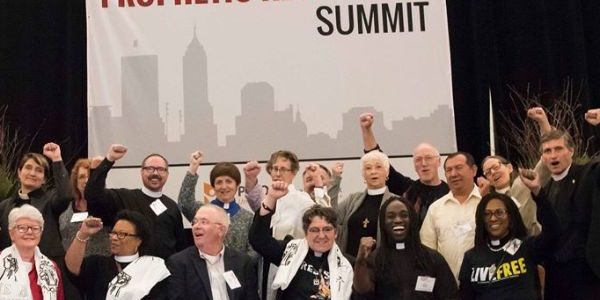 More than 300 faith leaders will come together from across the country to create an agenda to fight white supremacy from one of places where people listen the most – the pulpit. The Prophetic Resistance Summit will be held October 23-25 at the J.W. Marriott Hotel in Indianapolis. The event is part of an ongoing effort to address issues of injustice, from white supremacy to environmental degradation.

“We’re choosing to be prophets of the resistance,” said the Rev. Michael-Ray Mathews, director of clergy organizing for PICO National Network. “We’re a grassroots movement fighting against ideas and policy proposals touted by President Donald Trump and ‘the radical right.’ We’re exploring what it means to embody love in the face of fear and what it means to use resistance as a tactic to create meaningful change for our communities, communities most impacted by oppressive policies.”

PICO has been deeply focused on leading grassroots resistance movements on gun violence, voting rights and immigration in recent months. These efforts include helping to create sanctuary cities for immigrants in Washington D.C., working with The New Georgia Project to bring attention to unfair prosecution over voting registration and tireless marching and advocacy work in St. Louis, California, Chicago,and other locations that are battling with injustice over police brutality.

“We are here because racism and hate has no place in our communities,” said Bishop Cornelius Bowser of Charity Apostolic Church and the San Diego Organizing Project. “By uniting with faith leaders across the country, our voices become more powerful to resist injustice in all its forms.”

Created in 2014 as the Prophetic Resistance Project, this initiative is a multi-faith discourse that creates conversation and ideas for faith and lay leaders to be active changemakers by bringing life to the stories, values and teachings that inspire resistance. The project is an initiative of the PICO National Network, the largest faith-based grassroots organizing network in the United States, with federations in 17 states, Central America and Rwanda. Among those attending are representatives from the PICO affiliate San Diego Organizing Project.

The faith leaders scheduled to attend are:

The leaders will discuss civil disobedience and disruption as possible strategies to urge policymakers to create legislation that benefits the whole.

“Prophetic resistance is standing up and speaking out even when every instinct tells you to be quiet,” said Rabbi Sharon Brous, a faith leader with LA Voice, a PICO federation. “In the end, faith leaders know it is important our voices are heard, calling for justice, calling for dignity and for equality for all people. It’s most important when hardest to do.”

Brous is one of three faith leaders who will be a keynote speaker at the summit; she will be joined by Rev. Traci Blackmon, executive minister of Justice & Witness Ministries of The United Church of Christ and senior pastor of Christ The King United Church of Christ in Florissant, MO; and Rev. Alvin Herring, director of racial equity and community engagement for the W.K. Kellogg Foundation and former deputy director and senior leader of PICO. The summit is organized by PICO, and its state-based federations, IndyCAN and the AMOS Project.

Are You SDOP’s Next Community Organizer?
February 21, 2018

Your Gift Empowers Our Leaders to Live in Faith
January 8, 2018
Follow Us!